February 16, 2011
"Malaysia Truly Asia".
Have no freaking idea what it means, but THAT is the tagline for the Malaysia Tourism Board advertising campaign all over the world, particularly targeted at countries where the sun doesn't scorch your skin, and where there isn't an average daily temperature of 34C all year round.
In it you'll see pretty snapshots of white sand beaches, blue skies, blue sea, clean places and good food. Obviously, they will never show you this --
Signboards (put up as directional boards to weddings, loan shark advertisements, etc) and rubbish on the road side, pavement, and in between plants on one of the major motorways in Kuala Lumpur: 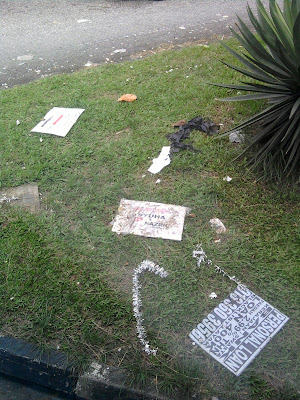 A pay phone booth (without the phone) filled with litter: 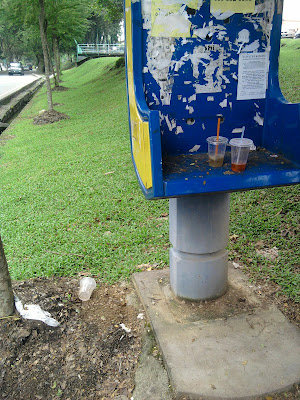 OR, their infamous public toilets (although there has been some "improvement" in certain shopping centres only recently), or those people who burn their rubbish openly and frequently.
And they're so proud...