Smokers can quit being so generous

February 26, 2007
Here is the most miraculous moment I have ever encountered this morning. I was looking out from a local coffee place, and saw smoke coming out from the top of the hedges.

However, pedestrians kept walking pass it but no one noticed it or paid any attention to it. I walked to the hedge and took a look. It was a cigarette lying on the top of the hedge, burning and releasing smoke. And it is not quite done yet.

I had to take a snapshot – priceless! But I did not put it off because some very fierce gangsters may have left it there for later, or may be, some very generous smokers have decided to share his joy!

And funnily enough, as I turned away from the cigarette, these 3 Chinese men sitting next to the hedge were staring and glaring at me as if I was some kind of an alien. And they were right.

Note the pictures below: The first being the mysteriously unattended, burning cigarette; the second shows that the cigarette was on the top of a hedge (red arrow) right next to a "No Smoking" sign (red circle). 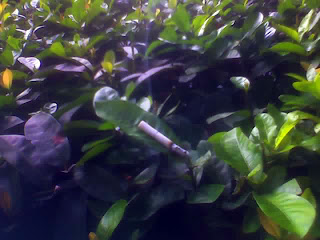 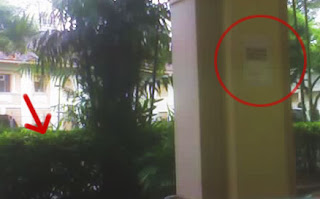 Anonymous said…
I thought Singapore was a FINE place, as in you get fines for littering? Now in the UK people are issued on the spot fines for disguarding cigarettes on the street. The UK is becoming a FINE place to live too ... I wonder if it will begin to make a difference?
27 February 2007 at 23:40

Erisian the Alien Whinger said…
Well that's exactly how effective the FINE is, for the smokers! It is definitely an offence discarding cigarette butts on the street in Singapore. But obviously you will only get a fine when the police sees you. No matter how clean the country appears to outsiders, there are backstreets that are full of rubbish and filth, and of course, tonnes of cigarette butts! It only proves one thing - these people will only abide to the CLEAN rules when under watch. It is human nature to be irresponsible and inconsiderate. Human!
28 February 2007 at 12:34