June 07, 2010
Just when we thought things couldn't get worse after the scary walkway in Bangsar South, they just did.
This is leading down to the scary walkway in Bangsar South. From where the red-ish tiles end, almost 10m of this pavement has been left untiled since last year. Yes, all they have done was putting some cement on it because it was really rocky and sandy after they were done with widening the road for the ever-increasing number of cars. And even the cement was put on weeks after the road was done. 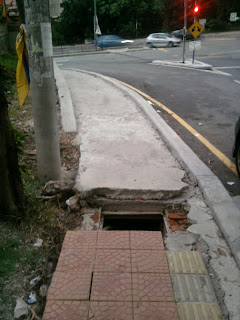 And as if walking on unfinished pavement isn't bad enough, we have to now deal with this big, deep hole. God knows how and why this happened, but I was glad I managed to notice it just feet before the hole. 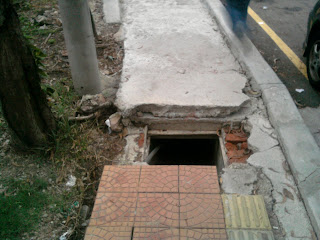 I saw this last Monday, and it's still here now - a week later. I'm guessing it is here to stay, since these people around here seem to be pretty happy about it. Maybe, unlike me, they all drive instead of walking down hill to get the public transport. Of course, it's just me whinging endlessly about something so pointless...