August 18, 2007
TVs are so common these days. You've got one, she's got two, he's got three (except poor me who is now trapped in a humble room who does not have access to one); and now even the fish!!!! 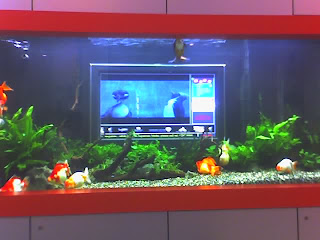 I couldn't believe my eyes when I first saw this in Suntec City. How on earth did that big TV screen get into the aquarium?!! Well obviously some technicians and engineers helped, of course, I'm not an idiot. But why???

I know this is really 'different', and 'innovative', to humans' standard. The business owner must have thought: "Hmmm... the wall looks kinda empty here, let's build an aquarium and keep some colourful and lucky kois to boost our business."

When the big, world-class aquarium is installed:

"Hmmm... the fish look kinda lonely and bored. Oh why don't we give them some entertainment? Let's place a TV in there. Fantastic! That way the aquarium would look soooo "out of the box" (a phrase the Singaporeans use literally everyday without really executing), the passers-by would be so amused (you bet) and the fish would be so happy that they get HBO, BBC, and CNN, with Dolby system surround sound! What an excellent idea!"

By the way, did they asked the fish? Is this ethical?

It is bad enough to be restricted in a tank with all that fake plants around them, and watching ugly humans walking by or standing next to them everyday; now they have to live with cable tv screening all sorts of horrible news and happening around the world, non-stop. I won't even want that in my room, would you?

Perhaps most Ah Bengs (Singapore's own version of Chavs) would envy these fish for having that LCD wide screen, but can we really measure these poor little creatures' feeling and desire according to the humans'? How do we know if they like that? How do we know if they want that? But one thing for sure, that certainly is not their natural habitat, and they are not meant to live like that!

I'm surprised the SPCA hadn't done anything (if that is under their 'black and white' job description at all). But perhaps this is the Asian standard of humanity and view on animal rights. And what can we aliens say?